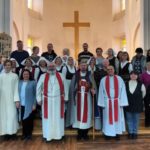 On October 23, 2022, the 19th Sunday after Trinity, ELCIR Bishop Ivan Laptev ordained Roman Sukharev into the Office of Pastor at the Lutheran Church of Vyborg, Leningrad Oblast. Congratulations to Pastor Roman and the congregation on this joyful event!   “So I exhort the elders among you, as a fellow elder and a witness of the sufferings of … END_OF_DOCUMENT_TOKEN_TO_BE_REPLACED 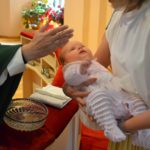 We would like to congratulate Deacon Roman Sukharev from Sts. Peter and Paul Church in Vyborg on the baptism of his daughter Arina! On Sunday, August 30, 2020, Arina, the daughter of Roman and Irina Sukharev, was born from above in Baptism! The Sacrament was administered by the congregation’s pastor Rev. Vladimir Dorodni assisted by Rev. Dmitri … END_OF_DOCUMENT_TOKEN_TO_BE_REPLACED