On October 23, 2022, students from the Department of Media Technologies of the State University of Film and Television, St. Petersburg, traveled on an ethnographic TV expedition to Vyborg, Leningrad Oblast. As they toured the city, the highlight of their trip was a meeting with Darya Shkurlyatyeva, a member of Sts. Peter and Paul Lutheran Church of Vyborg, music journalist, church organist and head of the ELCIR Information Department.
At the Lutheran church which has a pipe organ the students learned about the basics of the organ art. Darya told them about the build of the organ and how it is played. She played several short music pieces as a demonstration. The students tried their hand at playing the organ, too.
Darya also showed the group two original instruments, which are part of the ethnic heritage in Karelia and Ingria: a 5-string kantele and a psalmodicon. She shared about their history and use in ethnic and church communities in Leningrad Oblast.
The students will present their expedition reports and the videos they took at a public screening in mid-November.
Information courtesy of Department of Media Technologies, State University of Film and Television, St. Petersburg
Original post in Russian 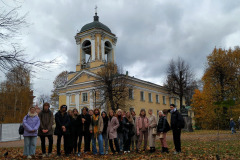 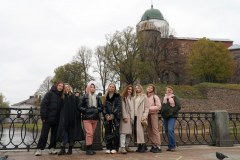 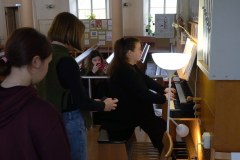 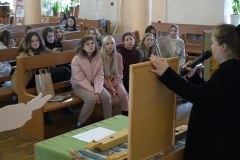 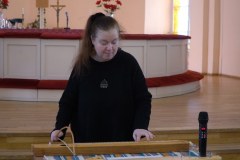 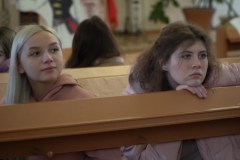